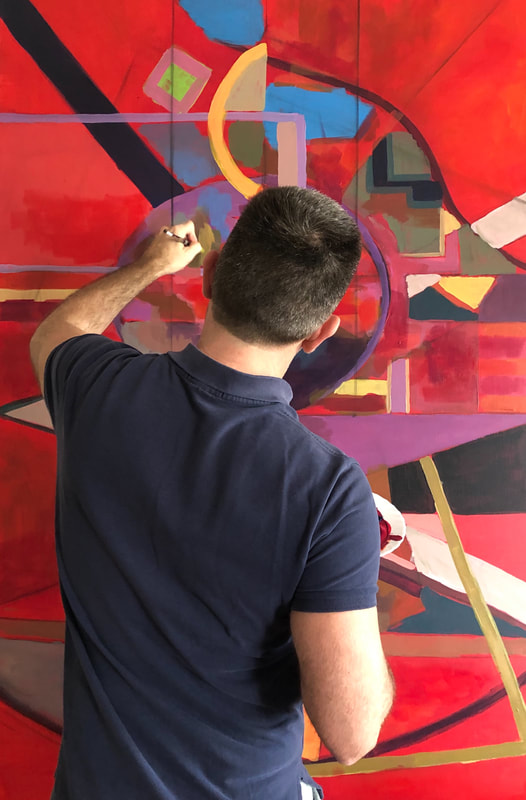 Marcos Terol is an international artist. His works ( oils on canvas ) present energetic movements of colours and shapes, projecting figures and scenes from nature. Focusing in his natural surroundings Marcos finds harmony and beauty in nature, figures and urban landscapes. ​

​
His studio set in his home is on the Costa del Sol near the ancient city of Malaga. His home faces  the coastline, washed by the Mediterranean Sea and nestled in between Andalusian white washed terraced houses and green pine trees. He paints at least 3 hours a day in his studio with brightly lit windows, facing his garden and the sea.


Marcos graduated with a Bachelor of Science in Economics and has studied painting in Madrid. For more than 10 years he worked as an interior designer which are the foundations for his career in painting. He loves contemporary artists like David Hockney or Alex Katz but is inspired by classics like John Singer Sargent or Joaquin Sorolla. His painting is spontaneous and instinctively he expresses his strong emotions through his heavy impasto or delicate transparencies.


Drawing from previous styles he uses colour and textures to define strong contrasts between light and shadow. He focuses on the nature   that surrounds him, urban landscapes and figures. One could describe his work as “Contemporary Expressionism”. Marcos´s paintings are sold worldwide and have been shown in one-man shows in Miami and Madrid.